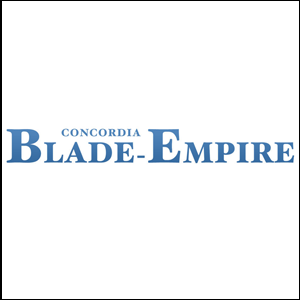 Read the original story and see the photos here!

Todd Robinson is the head coach, with Dan Haist, Matt Farmer, John Boden, and Cody Russell serving as assistant coaches for the Concordia team. 42 students have signed up to compete, and six of them are girls.

Concordia’s new trap club is one of 58 teams spread across the state of Kansas, with 1232 students enrolled in the program.  The first competition will be held April 22.

Unlike other sports, trap shooters do not compete head-to-head against opposing teams during the season. Instead, each team performs at its local gun club and scores are recorded.  The scores are then entered into the League database and tracked throughout the season.  At the end of the season, the highest scoring teams will then compete in conference meets and a state championship.

Coach Robinson has set modest goals for his team in their first season of competition.

“The number one priority for this sport is teaching the kids about firearm safety,”  he said. “We want them to always be focused and responsible around firearms.  As they train and compete, we also want them to have fun, enjoy the competition, and improve their skill.”

It was a lengthy process just to get the Concordia gun club’s facility built at the Cloud County Fairgrounds.

“I talked to (USD 333 Superintendent) Quentin Breese about the idea last Fall,” Robinson said.  “He and (CHS principal) Bryce Wachs really ran with it.  They did a great job on it; got a lot of things cleared for us.”

In January 2018, the USD 333 school board approved creating the trap club.

Once the project was launched, the actual site for the gun club was built in about a month.

Some of the financing for the facility came via a grant from the Community Foundation for Cloud County, but it was built mostly with donated funds and volunteer labor.

“So many people volunteered their time and effort,” Robinson said.

The actual traps themselves – the two machines that send the clay targets flying through the air – were donated by Kansas Department of Wildlife, Parks & Tourism, and Cloud County Pheasants Forever. The metal housings for the traps were donated, and Mike Chartier built the metal roofs over the housings. Jason Wheeler did most of the electrical work.

Jackson Construction was an integral part of the building project, and materials for the shooting pads – the ‘playing field’ where competitors stand to shoot at their targets – were donated by Crop Productions Services and Abram Ready Mix. The actual pads themselves were built with volunteer labor.

In trapshooting, targets are launched from a single ‘house’ or machine, generally away from the shooter. Trap shooting is one of three major sports done with a shotgun. The other two are skeet shooting, where targets are launched from two houses in paths that intersect in front of the shooter; and sporting clays that include a more complex course with many launch points.

Trapshooting is a sport that has been enjoyed throughout the world since the 18th Century when real birds were used as targets.  Artificial birds (clay targets) were put in to use in the late-1800’s.

The sport was first introduced to Olympic competition in 1900.  In 2013, trap shooting specialist Kim Rhode became the first American to win medals in five consecutive Olympic games in an individual sport.

The High School Clay Target League uses TrueTeam Scoring, a new type of scoring system that recognizes which team is best overall, not which team has the most top finishers. The main goals of the scoring system are to promote fairness for everyone, and awards team-focused accomplishments. The scoring system is scalable so it works effectively with all teams and conferences, despite their size. The scoring system actually encourages beginner participation, while always promoting firearms safety.

All league events are held at a shooting range (also referred to as a “gun club”) that provides the proper trapshooting field, including shooting stations and a trap house.

Each competitor is required to provide his or her own shotgun and ammunition. During competition, the ammo will be provided for the shooters through private donations. The Gun Club supplies all the clay targets for the competitors to shoot at.

In competition, each competitor must take a proper shooting position; load one shell; close the action on the gun; clearly call “Pull” or some other command for the target; shoot at the target; discharge the empty shell; wait with an unloaded gun for next turn. The scorekeeper does not call out when a target is hit but does say “Lost” when a target is missed.

All athletes shoot at their assigned targets, 5 shots from each of 5 different positions on the shooting pad.  The scores are tabulated and entered into the TrueTeam Scoring system.

The competition is a first for all of the students, and the coaching staff spent extra time working with students who were brand new to competitive shooting.

Robinson worked one-on-one with Michael Ashland, a 7th Grader just starting out. He shot three out of his first ten clays, an improvement over his last performance.

“I did good; I’m improving,” Ashland said. “I like it a lot.  The coaches take the time to work with us.”

Aaron Wachsnicht is one of many volunteers who devote a lot of time to the club.  His son Bradyn, a 7th Grader, is one of the team members.

Shea Trecek, McKenzie Widen, and Madison Strecker are three of the girls on the team, and each of them knows how to handle a shotgun. They still miss some of the targets when they shoot, but the crack of their shotguns shattered most of the orange clays flying through the air. Widen’s shooting skill was already apparent.

“I’m doing pretty good,” she said, “but I also know I can get a lot better at it. The coaches are really good about working with us.”

The League has issued a mandate that all teams must abide by: safe and responsible handling and storage of firearms and ammunition is the first priority; participation is a privilege, not a right; sportsmanship must have a constant presence; students must have an equal opportunity to participate; ethical behavior, dignity, and respect are expected from each athlete; participants must be chemical-free; academic priorities always come before participation in the gun club; the success of the team is more important than individual honors; and compliance with all school and gun club rules and regulations is required.

Robinson and his fellow coaches expected a large turnout for the inaugural season of the Panther Trap Club. “This is a rural area, so kids grow up interested in hunting and firearms,” Robinson said. “It’s a good way for us to teach them gun safety.  Trap shooting is something anybody can do. Even someone in a wheelchair can shoot trap and compete. We hope it gives some kids a school family they can belong to, where they can form friendships with other kids.”

Assistant coach Dan Haist echoed Robinson’s sentiment, but also noted his personal interest in helping get the trap club off the ground, and promoting trap shooting in general.

“I’m paying it forward,” said Haist, who is once again shooting trap competitively after taking some time off due to injuries. “When I was a Sophomore in High School, a couple guys from the old Concordia Gun Club – Charlie Thomas and Jimmy Wiggins – took me under their wing and taught me how to shoot trap.  What I really like about this sport is that it fits anybody, boy or girl.”